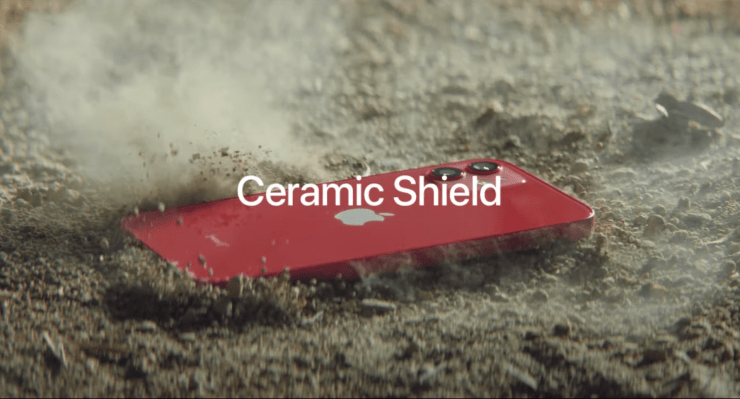 The ad shows a woman talking on her iPhone 12(Product Red) when she “Fumbles” it while switching ears. Then the Tabla(an Indian instrument) starts playing – “The Conference” by Nitin Sawhney, as the women juggle; struggles to keep the iPhone from falling.

In the end, the woman unable to save the iPhone drops it on the ground. Picks it up again, relieved of seeing her iPhone unscathed.

The ad ends up with the tagline saying “Ceramic Shield. Relax, it’s iPhone.“

What is Ceramic Shield?

The Ceramic Shield is made by infusing ceramic in glass which improves its durability without obstructing the transparency of the glass. According to the company, it’s Apple’s toughest screen and claims to be 4 times stronger than the Corning glass on the iPhone 11.

What people are saying about ad

“Why no dropping on the pavement?”

“I got scratch marks“

The fact that the iPhone is dropped on the soft ground has left viewers unsatisfied. Users are saying that the phone should’ve fallen on the bricked pavement and not on soft dust.

I do find it odd that the woman walks on the pavement and the iPhone is shown dropping on a little part beside the bricks, and on the soft sand and rocks. Maybe Apple is playing a safe hand in the ad. Who knows.

Regarding scratch resistance, Apple is targeting the iPhone’s shatter resistance rather than scratch resistance. So, don’t be surprised if you feel scars on-screen after dropping it on a super harsh surface. The ad doesn’t cover this.

The Ceramic Shield glass ad is a follow-up of the “Cook” ad which is part of Apple’s “Relax. It’s iPhone” campaign. This is not the first in the series of ads for iPhone 12 as Apple has been busy creating ads of top iPhone 12 features.