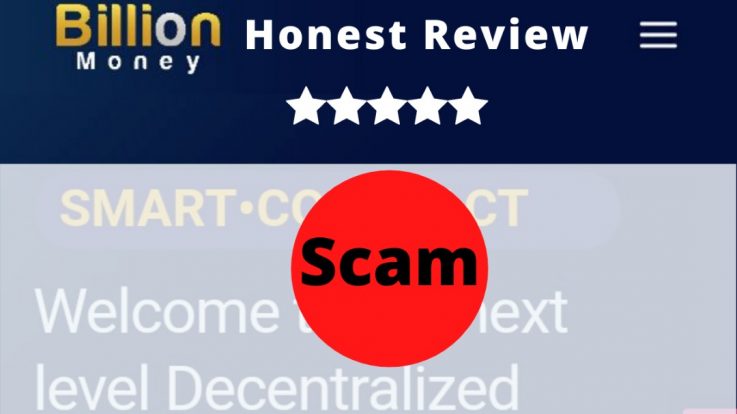 Summary: Billion money live is a garbage unoriginal idea in a billion number of ways. It’s nothing more than a scam, an illegal pyramid scheme that will only fool the gullible and the greedy.

Read below for a full billionmoney.live review

If there was ever a presumptuously named platform, billionmoney.live takes the cake. A platform that will hardly make thousand- naires wants you to believe it can make you millions and heck, even billions. Like the name billionmoney.live, the whole program is one big gimmick.

In this review, we walk through the entire process and mode of operation of billionmoney.live.

Let’s start with the obvious. Billion money platform isn’t an original idea. It’s the same way scammers copy each other. If a system works for one scammer, then other scammers follow suit. From my extensive research, the founder(s) of million money seems to be the first to start this new pyramid scheme idea. Want proof? Head over to million.money website. Apart from the obvious name similarity, you can see several other similarities. Billion money seemed to lift everything from it – the design; in fact even some sections appeared to be copy-pasted. See screenshot below.

Moving on to proof of scam.

Billion money does not have a founder. That is worrisome enough. So who do you hold responsible when you’re up several levels in the system and it crashes? Stay away from programs without a face behind it. Although billionmoney live tries to pass it off as proof of their credibility. They say the platform runs on smart contracts and everything is automatic. You’re about to find out why this doesn’t actually mean it protects you and your money from getting scammed. Billionmoney.live creators hijacked the awesome smart contract idea for their scam.

To help you understand, let’s talk a little about Ethereum smart contracts. Like other cryptocurrencies ethereum (founded by Vitaik Buterin) is an awesome tech that provides a means to send digital currencies from one point to the other without a middle man. One of Ehereum’s unique selling point is its smart contract that enables anyone to program codes that will execute based on a particular set of conditions and will not need a middle man. However note that, Smart contracts are not legally binding.

It is this technology that billionmoney.live uses to power their scam platform and here’s the main issue they won’t tell you about.  Smart contracts are garbage in garbage out. If the smart contract was programmed to cheat or scam you, it will. And that is why it’s important that you know whoever created and uploaded the smart contract to the blockchain network.

Think about it, even the founder of the technology Vitalik Buterin is well known. He’s not hiding behind the shadows of smart contracts. Because even he knows the value of credibility and transparency. But the creators of billionmoney.live won’t reveal themselves. Can you really trust that these faceless people don’t have a hidden agenda to scam you and steal your funds? One thing is clear – they are hiding because they have something to hide. Why should you trust a platform of people you don’t know?

And don’t be gullible. As shown below many have fallen for this scheme. If it claims it has no founder, who designed the website, who created and uploaded the smart contract, who created the various groups and communication channel? Be wise people.

Spoiler alert: It’s another illegal pyramid scheme bound to crash. Google pyramid schemes and see for yourself, they always crash. We will delve more into why pyramid scheme crash in the latter paragraphs but first let’s see how billionmoney.live works

Billion money live works like other pyramid schemes of its kind. It’s the same multi level upline, down line garbage. In billion money you begin in level 1 paying $20 in Paxos (a type of cryptocurrency). This money is distributed amongst those in the higher levels. You are expected to recruit members to join the system. You will also be expected to keep paying increasing amounts to ascend from one level to another.

See details of structure below

And here’s why all pyramid schemes crash. In the beginning, new recruits are easy to find but as months roll by the rate at which new recruits join the system continues to dwindle until it stops and crashes. Only those at the uppermost level stands to benefit when it eventually crashes while those at the bottom lose money and you can never predict where you’ll be when it crashes. You could have just paid $10k to reach level 8 and then it crashes.

For obvious reasons pyramid schemes are not sustainable business models. Do not confuse it with legal MLM (Multi Level Marketing). For pyramid schemes no marketing is truly going on. Because for a market or business to exist there have to be buying and selling of product/services. Billion money live has none of this. It has no product and no services. It only depends on the injection of funds by new members which is why its crash is inevitable. Do your research. Pyramid schemes have a near 90% failure rate within months. The remaining 10% strong ones eventually crashes too.

So why take the risk? Is it really a smart decision to invest in a program with a 90% fail rate?  Do not believe the hype surrounding pyramid schemes. Whoever is pressuring you to join the billion money live platform is only doing so for his or her advantage – to rise quickly within the pyramid.

And let’s be honest, Billion money live is just completely false advertising.  Show me any one who has ever become a millionaire or billionaire through these scheme and I’ll proof to you he’s a liar.

My best advice – Stay away from all get rich quick schemes.

Want to invest in sustainable platforms?

Check this out here